Title: blow on the spirit with the body's breath
Fandom: Supernatural
Characters: Dean Winchester, Castiel
Pairing?: Dean/Castiel
Rating: R for non-explicit sexual situations
Summary: So yeah, it’s weird, this thing with Cas, but Dean’s just about getting used to it. Used to it enough that he stops questioning so much, anyways, but for all of Castiel’s assurances that he’s just experiencing everything through some weird kind of angelic Cas-filter, there’s one thing that still makes him wonder, sometimes.
Word Count: 2885
Notes: Miri posted something on tumblr about Dean's handprint scar. I said I'd write something about it and... ended up writing something that is more about intimacy than sex and takes over 1000 words to even mention the handprint scar. Whoops? Also asexy!Cas somehow snuck his way in there. Which I am completely fine with because the fandom needs more of him. Title is from Lisel Mueller's poem "A Long Way From Hell".
Warnings: Sexual situations and mentions of Hell. I think that's about it?

Medium: TV/LJ RP
Fandom: Supernatural/Firefly/Dramadramaduck
Subject: Castiel<>River Tam
Title: we are displaced
Warnings: None!
Notes: CROSS-CANON MOIRALLEGIANCES, GO. also this would be the second mix i have made for a set of mine and ichi's cr, what is my life sobbbb 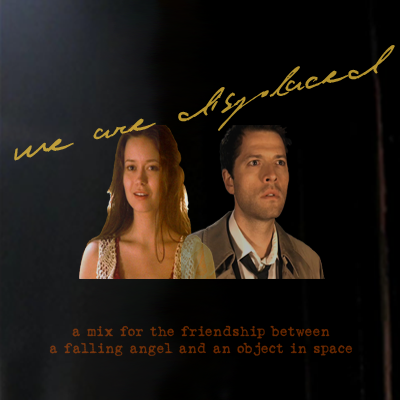 Title: i shall not suffer them to take my children
Fandom: Supernatural/Puella Magi Madoka Magica
Characters: Dean Winchester, Castiel, Bobby Singer, Madoka Kaname, Sayaka Miki, Death
Rating: PG-13 for occasional language and some disturbing imagery.
Summary: Madoka was almost at the source when she suddenly realized that there was no Grief Seed, and caught in that no-man’s land, she froze. She had no idea what to do.
Word Count: 5588
Notes: I like fix-it fics. I like crossovers. I think Castiel deserved a better end than he got. And no one will ever be able to convince me that season 6 wasn't the story of his contract and the start of season 7 wasn't his transformation into a witch, that is totally under Madoka's jurisdiction mmkay? mmkay.
Warnings: SPOILERS for all of Madoka Magica, and up to 7x01 of Supernatural. Also my hideously self-indulgent writing and my own theories about the prophets and God in the spn-verse. Also abuse of the poor prophet Isaiah.

Title: Rolling Boy
Fandom: Supernatural
Characters: Castiel, Dean Winchester
Pairing?: Dean/Cas if you tilt your head and squint really hard.
Rating: G
Summary: "Somehow, I'm still rolling." A character study of sorts through the medium of a hand-drawn VOCALOID video.
Notes: So because I am insane, I've been associating the VOCALOID song Rolling Girl (original video here) with Castiel all summer. Because I'm even more insane, I redrew the entire PV for him. :'D Enjoy?
Warnings: None, unless you have something against Japanese.

Title: SuperWho: Episode Two
Fandom: Superwho (Doctor Who/Supernatural)
Characters: The Tenth Doctor, Donna Noble, Dean Winchester, Bobby Singer, Sam Winchester, Castiel
Pairing?: None (as of yet)
Rating: PG-13
Summary: SuperWho episode two: with the souls inside Castiel able to go into meltdown at any moment, the Doctor and Donna seek out the help of Bobby and the Winchesters in making a ritual from scratch to save him.
Notes: SUPERWHO BANDWAGON AHOY. Second episode of the Superwho series I'm serialising on my tumblr. That site isn't good for some people's internet connections, so I'm also posting them here as I finish each episode. :'D Imagine each image+dialogue combo as part of a scene in an episode, and you're golden.
Warnings: BE WARNED FIRST OF ALL THAT THIS IS AN IMAGE-HEAVY POST, NOT DIAL-UP FRIENDLY. Other than that, spoilers for the end of season 6 of Supernatural; questionable blending of the physics and mythologies of the two series together; unashamed fix-it for the s6 finale; shamelessly self-indulgent writing.

Title: SuperWho: Episode One
Fandom: Superwho (Doctor Who/Supernatural)
Characters: The Tenth Doctor, Donna Noble, Dean Winchester, Bobby Singer, Sam Winchester, Castiel
Pairing?: None (as of yet)
Rating: PG-13
Summary: SuperWho episode one: The Doctor and Donna follow a massive energy surge to early 21st century America, where they stumble on the Winchester brothers and discover that an old friend of the Doctor's is in some serious trouble...
Notes: THIS IS ME, JUMPING ON THE SUPERWHO BANDWAGON. I have a sort of nebulous season of these forming shape in my head of which is is the first episode; I'm serialising them on my tumblr, but that site isn't good for some people's internet connections, so I'm also posting them here as I finish each episode. :'D Imagine each image+dialogue combo as part of a scene in an episode, and you're golden.
Warnings: BE WARNED FIRST OF ALL THAT THIS IS AN IMAGE-HEAVY POST, NOT DIAL-UP FRIENDLY. Other than that, spoilers for the end of season 6 of Supernatural; questionable blending of the physics and mythologies of the two series together; unashamed fix-it for the s6 finale; shamelessly self-indulgent writing.

Medium: TV
Fandom: Supernatural
Subject: Dean/Castiel
Title: love-ology (i'm sorry-ology, forgive me-ology)
Warnings: Vague spoilers for all of season six right up to 6x20.
Notes: I've actually been sitting on this mix for a couple of weeks now - it started coming together around the time My Heart Will Go On aired but I didn't want to do anything with it because some of the songs were only on there based on the promo photos for 6x20. And well, now that it's aired, some of the songs fit even better than they did before, so here we go, one fanmix for you all. This mix is heavily based on Dean and Cas's relationship in s6.

( You are about to view content that may only be appropriate for adults. )

So I got into Supernatural a few weeks ago and got completely and utterly hooked by it. And now because there's little else to do in the current circumstances at the moment I have made a bunch of icons from that most depressing yet beautiful of episodes, The End. AKA, this is the post that showcases how pretty Misha Collins is even when playing a stoned ex-angel and just how many weird things Jared Padelecki can do with his face when playing the Devil. :'>

C-C-C-COMBO BREAKER. About time the endless stream of that we should voyage far chapters got broken up a little. B||

Medium: Books
Fandom: The Waywalkers duet
Subject: Sam Linnfer
Title: the man of a thousand faces
Warnings: None, other than a really obscure fandom. :’>
Notes: So basically the Waywalkers duet is a series of two books that needs more love. Seriously, it is so obscure and it makes me sadfais. :c BASIC PLOTLINE IS the main character, Sam, is the Son of Time and Magic, aka actually the Devil Incarnate in disguise as a mortal, but in actual fact he’s a decent chap trying to live a quiet existence in London. Except that that all goes tits-up when a friend of his who just happens to be Freya (as in, Norse mythology Freya) dies and he’s propelled into what turns out to be basically trying to stop the end of the universe. So what this means is that it is an epic series and you should all go and read it right now. 8D Oh, and the guy on the cover of the mix is Ben Whishaw, the actor I (and almost every other Sam player on LJ because there’s so few of us sob) use for a PB in the RP I play him at. :>

Also, a thousand thanks go to Shiro for introducing me to the final song, holy crap! It’s perfect and Sam’s theme song, I swear.